This week I have been a busy bee writing up some fabulous guest posts for other blogs all about fabulous historical women, so keep an eye out on social media for these, as I will be RTing the links etc.

I am often asked by people where my interest in historical fashion comes from, and I must say that it is directly connected to my interest in Feminism. Clothing and fashion has been at some points, one of the few ways women could express themselves and find a voice through out history….countering that point,  fashion has always been a way to police and control women…whats not interesting about that? Sprinkle on top an interest in textiles and fashion in modern day life and you have a cauldron full of fashion fun.

This weeks History Ahoy! is all about the hips, as people responded so well to last weeks “Historical dress of the week“. It’s such an interesting subject, and I can spend hours talking about crinoline and other historical skirt under garments (over wine, because I am rock and roll obviously!)

Panniers – These were most prominent in the 18th century and were very popular in the French court but were first seen in the Spanish courts. It was this under skirt that created and supported an extra wide waist and of course, helped spread a bit of the weight of the over skirt evenly. If any of you have worn a wedding dress, imagine that x100 and you can get an idea of how much weight these ladies had to drag around most days if they were fashionistas. So any extra support was always appreciated by them.

Sometimes made of fabric, other times supported with mental frames, these bad boys took wide skirts to the next level. I feel tired just look at them. I think wearing a rucksack is effort, let alone several stone worth of skirt, trail and wire framing! ( and we haven’t even mentioned the weight and size of the wigs!) 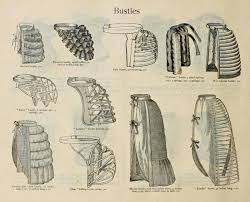 Bustle – The “junk in the trunk” effect is historically created by a bustle or hooped petticoat worn underneath a skirt and tied around the waist. These were worn under a skirt and worn above the bottom, to give the big butt effect well know in the Victorian era. They stuck around until around the 1920’s. As if wearing an Edwardian hobble skirt wasn’t hard enough, try doing it with extra butt weight. Seesh!

Crinoline – All I need to say really is Scarlet O’Hara! It was a hooped wire frame worn on the hips that created the extra wide skirts we have come to associate with the American Civil War and Victorian eras.

Invented in France around 1830’s to make skirts extra swish! Talk about the need for personal space, skirts could end up being several feet wide!

Here’s a  nice lil’ diagram to see how skirts and hips totally changed through each historical period. Snazzy huh? I wonder when some of these are going to come back like the Ninties revival has recently? Which style would you like to try? I can’t quite decide…personally if I had to, it would be the “Tudor style” which isn’t featured here…one day. One day.

Such a stunning 18th century dress with pannier under skirt. Beautiful colouring and embellishment too. I would LOVE to wear one of these one day…obviously I’d go to the loo before hand!

Lovely example of a daytime bustle dress. Beautiful isn’t it? I imagine it’s a nightmare to walk in though.

Loving the detailing of the sleeves on this 18th century gown. I bet it looked stunning in the candle light and on the dance floor *floats off to imagination land*

A 18th century day dress, note it’s a bit shorter than the others, this meant you could look shit hot AND walk in the country / streets filled with historical filth without your skirt getting too damaged….remember they rarely washed clothes and used to throw human waste in the streets…niiiice.

I just adore this beautiful number, I presume it’s a wedding dress –

Look at that teeny tiny waist! Look at it! Before you panic, remember women were very short in those days, I would be a giant woman for the time period, and I am short by today’s western standards – 5ft 2. Most women were about 4ft 5 ish so the freakishly teeny waists of yesteryear may have been expanded a wee bit, smaller humans = smaller waists. This doesn’t mean women didn’t tight lace, they did, but it wasn’t as wide spread or as extreme as we are led to believe.

Love this red bustle dress, reminds me of the Queen of hearts! Just look at that detail on the trail. So stunning! *drools* I love how this style still lingers in fashions. I adore big bottoms and ruffles, therefore I adore bustles too.

Just your normal day to day crinoline dress. I love this woman is like “are we done yet?” –

1920’s style pannier, as a hippy gal, I love it! With my hourglass figure I would have been rather depressed and my chest very definitely taped up in the 1920’s!

An example of a train or trail, yikes, I would not like to drag that after me for hours on end. I got arm ache from holding a pint for too long the other day ( true story)

Dress of The week

*que horns* Is this historical inspired wedding dress. Sweet baby Jesus, it’s beautiful. I know I confuse people with my obsession for wedding dresses yet aversion to marriage (it’s EFFORT people) but dang, when you see dresses like this, you understand why I appreciate such design and textile skills, surely? Its from the Elie Saab 2013 collection if you have to have it (and please send pictures and maybe the dress once you’re done if you do!)

Anyway that’s me done for this week, but make sure to check in next week for more historical frock fun! If there is a time period of area that you wish me to look into, let me know on my social channels or comment below ( either makes me feel special and loved) Next up for me is typing up this weeks feminist weekly round up, so keep an eye out for that too!