Tis Christmas time in case you have been missing the living hell that has been the UK high streets this past Month. Which, as a matter of fact, I have, as I do most of my Christmas shopping online. Yes, it’s true that whilst avoiding the carnage of people bare-knuckle fist fighting over a Primark Hogwarts bathrobe, I prefer to sit in my slippers with wine and watch films.

Now, I’ll be to the point. We all know that the “Muppets Christmas Carol” is the greatest Christmas film ever created. No ifs, no buts. Michael Caine playing a deadpan Scrooge whilst a bright green frog/pig hybrid* sings about finding love in the same shot, arm in arm with a talking rat? A masterpiece.

Sometimes, I do watch other Christmas films, and here are my 10 must watches if you have to watch something OTHER than “Muppets Christmas Carol” this season.

Halloween being my favorite time of year, and Christmas maybe not quite so much meant that this film was an instant shoe-in with me. A film I can watch all year round but any excuse to put it on and I will. Therefore, it’s become one the first I pull out to get me in the mood, once the dark nights begin to crawl in. It also has an amazing soundtrack…gah, I could gush about it all day!

Now, this film is close to my heart as I watch it with my mother and sibling every year. If you haven’t seen it, please do. It’s a Golden Hollywood Classic and some of the amazing dance numbers will be familiar to you from GIFs everywhere. You also get treated to the beautiful Bing crosby singing “White Christmas”…If the below GIF doesn’t convince you to watch its camp, fabulousness, I don’t know who you are anymore!

Jumping from one extreme to another with the hilariously dark comedy “Scrooged”, starring Billy Murry as a modern-day Scrooge who works in Television – nuff said.. Well worth a watch if you want something funny yet familiar.

I live in London and know for a fact that the London presented in the film isn’t real but ohhh, I wish it was. We all live in the hope that we will suddenly wake up in a Richard Curtis film where suddenly the class divide will disapper, house prices become reasonable and Great bloody Britain rises as bumbling, adorable floppy-haired, posh men-children are allowed to mumble through the streets of London again, wooing fair ladies. Admit it.

I loved watching this every year with my sister and then torturing my parents with screams of “Kevin!” for the rest of the night. Oh, how we laughed.

The soundtrack alone gives me shivers but the dance scene in the snow is just heartbreakingly beautiful. Put simply, Tim Burton’s classic is a must-see. I’m not crying, you’re crying.

Full disclosure: I adore the opening of this film and then once it jumps to the future, I couldn’t give a shit. Therefore, just watch the beginning and enjoy the feels, perv on the elf and be done with it.

Fuck off, it is a Christmas film. This is my blog and I can do what I want. Look at the gif, that is snow and lights which makes it’s Christmassy. I know, I know, another Tim Burton on the list. I have a problem or taste**, you decide.

It opens with David Bowie going through his old drawers ( he could go through my old drawers any day) and has a cracking sequence with a choirboy and a flying snowman. At least that is how I remember it. I usually just find myself astounded that it appears to be made solely out of pencil crayon drawings (Usually, I watch half cut by this point)

I first watched this with my sister and it has become an instant staple in our household. I’m the Anna before you ask. May you all find your inner sassy Elsa, this Christmas. Sing it with me people, as your relative drops another casual politically horrifying comment across the dinner table, “Let it go!”

So what do you guys think of my list? What have I missed out that is a must-have in your household at this time of year? I am always seeking recommendations but I stand by my entire list!

* They never quite get around to explaining how the genetics work in the Cratchit family in the film, do they?

**If you answered that with “Problem” you can’t sit with us anymore.

Tis the season for consumerism, but when your budget is a bitch and refuses to allow you buy the things that you deserve, then one has to resort to lamenting this fact in a blog post. So here.We.Are.

In my lementing, I have conjured up this list of fine items that I would love to splurge on if the money fairy decided to appear (my door is always open to her) I am feeling classically British this winter, which may reflect a lot on this “dream” list. I mean, if you’re going to invest the money, do it in timeless things……Or ultra-modern digital accessories. What can I say? I’m a very nuanced person. It’s a curse.

By the Brand Chaos, made up of a super styling team Kathrine Lyall and Charlotte Stockdale. I’ve had the pleasure to meet these ladies very briefly in a former role and they are just as fabulous as you’d imagine and full of amazing anecdotes. I have featured this case in its original design before on my Instagram, but my heart has officially been taken by the newest member of the “ugh!” family. Metallic pink and black. I need this in my life. I also need a phone that one of these cases would actually fit in after dropping my latest upgrade down the sink but that is a different story.

I long to whisper sweet nothings in-to you.

Thanks to the magic of social media, I am now obsessed with Shrimps. Especially, their sexy ass coats. This is my favourite this season but I am also on a quest to obtain one of their stunning faux fur designs too. I recently queued in line for ages to get excess to their sample sale but alas, the one I was looking for avoided me….but it will be mine. Oh yes, I will own these coats dammit.

I want you wrapped around me.

Beholdeth these Valentino ankle boots. Everything about these boots is fabulous. They come in various colours as well, which is unfair when you think about it, as now you have to have them all.

I have been in love with this style forever. I am one of those people who secretly sits and hopes that tophats will unexpectedly make a mainstream comeback and ruffled skirts will engulf the streets. Until then, I will have to settle for riding jackets and all the tweed the UK can throw at me.

Here endeth the journey, for now. Ah, that was a lovely journey, wasn’t it? After scrolling the internet for a few of my favourite pieces, I’m really interested to know what everyone’s favourite themes or key items are for Winter. I appear to be a lot more old school than I realised! Before I go, BIG thanks for the social love on my last post, it made me feel all lovely inside <3 <3

If you don’t follow me already just follow the links on the sidebar to do so. DO THIS FOR ME, JANET!

Until next time, my darlings!

This weekend, I have mainly been working on a super long list of contacts for a project due Monday. I have officially become spreadsheet blind. I am dreaming in columns. As the task was time sensitive, I made to sure to leave enough spare moments for time wasting in my schedule as I know who I am. The best part of working on the internet is the random stuff that you find whilst casually doing your day to day job, this means I am never wanting for things to browse as my “read later” list is extensive. Here are some of the things I found on the internet during my breaks that kept me sane whilst I gently wept over my keyboard in between breaks.

The fact that there is a Moomin Theme Park.

I shit you not. All your childhood dreams have come true and you can actually travel to Finland and visit Moomin valley. Moomin World  is Located in the island of Kailo beside the old town of Naantali, near the city of Turku in Southwest Finland. I mean, LOOK AT IT. It’s marvelous. How happy do they look in that picture? And whats that, they have a replica of the actual Moomin house? My inner ten-year-old self cannot contain herself. I’m adding meeting one of my fashion icons – “Little My” onto my bucket list immediately.

If anyone knows where I would be bale to stream this show, I would love you forever.

The woman engaged to a chandelier.

I love this story far too much. Sometimes a story just casually pops up into your news feed when you’re feeling blue and you have no idea whats going to happen when you click the link. All that you do know is that it won’t be boring. This was that story this of the week for me. To summarise, this fabulous creature has decided “screw men, this is exhausting” and set up house with a cornucopia of chandeliers, one of which she is engaged to.

The woman, Amanda, seems sincerely happy with Lumiere, her fiance – so good for her enjoying her polyamorous relationship with not just any old lamp, but instead, with the Liberace of lighting options.Way to go extra, Amanda, I applaud you.

We all do that thing where we spot an image (pictured below) and it captures us and it leads you on a random adventure. Well, that was my story this week with Pauline Boty. She had been on my mind ever since I first saw her picture at the V&A “So you want a revolution exhibition” (Fabulous event – I really want a youthquake!) and I found myself researching her more. 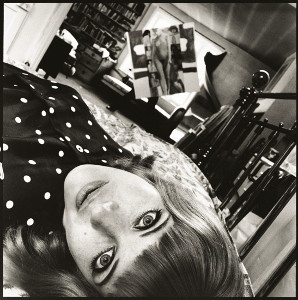 With the recent death of the Cristine Keeler, this painting she made during that period was brought up in a feed of mine and I was drawn back into a Wikipedia whirlpool trying to find futher information about her. So much so, I am currently working on a post about her. Very fascinating woman.

Literally digital crack, I discovered this game back in sixth form and haven’t been able to give it up since. The concept is simple, capture as many bees in bubbles (hence the snazzy name) within an allotted time as you can and try to beat your best score. Add a saccharine piano accomplishment to do it and et voila! The best way to waste a few hours of your life without feeling dirty afterwards… or something that will haunt your dreams. You decide.

There are loads of wonderful games on the Orisinal website, so I highly recommend giving it some time on a rainy Sunday..on that note:

The fact that it is snowing. I was having a wonderful Sunday Morning until I woke up to find world coated in fresh snow. It’s all well and good when you can practice hygge in your onesie in your flat, surrounded by cats but something else completely when you have to get up and commute in it on Monday morning. Sometimes, I am too forward thinking for my own good but I can’t help feeling glum about the fact that it is winter. How do you guys make yourself feel better in the colder months? I need all the help I can get – my housemate has recommended whiskey in my tea, I do wonder….