I hope that the weekend is treating you well? I am not going to lie, I am still recovering from a great night last night and am now eating my pain away! It makes me so sad that I used to be able to party all of the time whilst suffering very little and now as I edge ever further towards old age I now know what people mean by “three day hangovers”. Sniffles.

Oh youth, why have you forsaken me? Mind you the alternative is far worse, so I will take the three day hangovers and winkles anyday!

Historical Gown of the week –

Can you imagine trying to get through a door, let alone the loo in this dress?! Lovely detailing in the sewing work. Just beautiful.

So this weeks history Ahoy is all about the fashion of the 1960’s. Trust me it’s just an over view, as the best part of this decade is the subcultures that popped up – mods, hippies, fashionista…so I will revisit each one at some point but for now, let’s perve!

I couldn’t even start to mention the 1960’s in fashion terms without mentioning one of mine (every other females) fave film. Racist portrayal by Mickey Rooney aside (eurgh), it’s such a fabulous film and the clothing is AH-MAZING DARH-LING!

Oh my god I want that coat, and I want to hang out in London with Twiggy. *throws self on bed and weeps at being born too late*

Could this girl BE any cooler? No, no she could not. She knows the way to my heart – eyeliner and hats. Bitach knows how to please.

Everyone loves a Si-fi inspired stripe ensemble. How cute are those skirts? They remind me of Xena’s skirt in Xena Warrior Princess. One of the greatest Tv shows ever made. 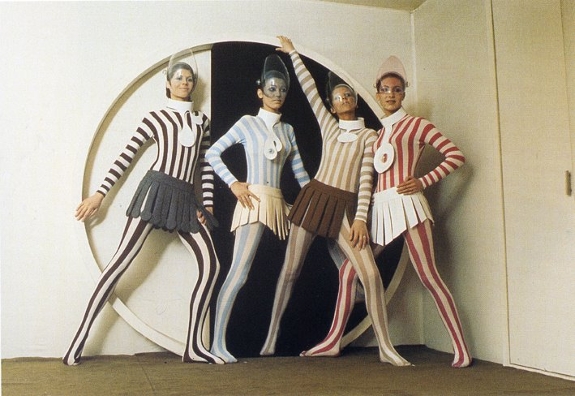 Monochrome was all the range and some of these dress are iconic and the patterns have pooped up in the 1980’s, 1990’s (which I consider a 60’s fashion reinvention era). Groovy!

Could Diana Ross BE anymore fabulous than in this style that would be homaged by Britney spears in the Toxic video?

Yes, yes she could. Look at that coat! WOOF!

Lets have a gander and see what was happening in Bollywood. The back combing craze certainly added some bouffant class to Bollywood. More on Bollywood in later posts.

London was swinging, and hippy style from San-fran made a lil ripple in the clothing chooses of the cool kids.

Any fashion blog recommendations are most welcomed! If you want to get a regular fix of historical fashion then pop over to my pinterest account and fill your boots.

Until next day darlings!